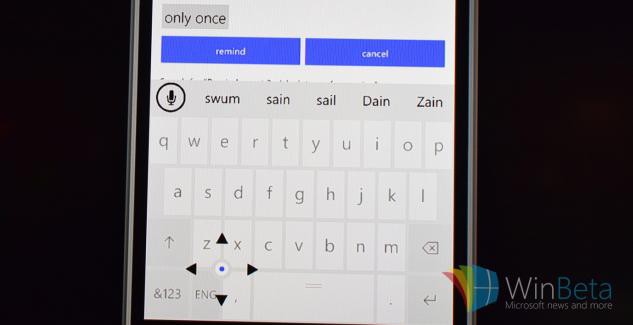 You can move the keyboard cursor more precisely

One of the new bits in the mobile version of Windows 10, not officially announced on January 21st, but found later in screenshots and videos, is a virtual pointing stick in the on-screen keyboard that reminds of Lenovo’s physical stick in the ThinkPad laptop series. The virtual precision pointer in the phone keyboard can be found in the bottom left corner and is likely to match the accent color of your Windows phone.

This small virtual precision pointer will give you the ability to move the keyboard cursor around the screen in texts and precisely set the cursor at the right place while writing and editing documents and texts.

By adding a virtual pointer and an option to dictate in the Windows 10 keyboard for phones, and the introduction of the brand new touch-friendly Office apps, Microsoft definitely improves the overall productivity in terms of writing and editing documents.

Other new and cool additions in Windows 10 for the phones, not revealed by Microsoft, may be found in February, when the first pre-release version for mobile is expected to go live.