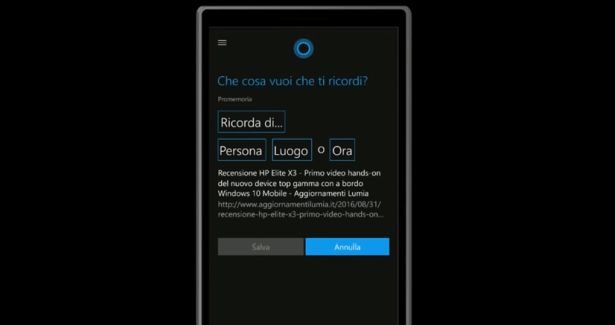 A new Edge/Cortana feature has been spotted in one of the internal Windows 10 Mobile builds from the Redstone 2 branch. A report coming from the Italian Windows Phone site Aggionarmentillumia.it has revealed a new ‘Snooze’ option in the Microsoft Edge menu.

Snooze acts like a quick shortcut to create a Cortana reminder, which you can access from the browser’s menu, and then set up time, person or/and time, along with a link to the webpage with its title and description.

With the Anniversary Update, Microsoft improved Cortana by integrating it better with the OS and some built-in apps. As we’ve reported several times this year, the next major update (Redstone 2) might be focused on mobile devices, so it’s not surprising to see some new features already being tested in the internal rings. Many of these features, including Snooze, BlueLight and People Bar, could be rolled out soon to Windows Insiders.