All new features and changes in Windows 10 for Phones

Tiles are now translucent instead of transparent (this option is missing) and you can set a full size background behind them. Microsoft has promised that the transparent tiles from Windows Phone 8.1 will be coming to future builds of Windows 10 so you could switch between translucent and transparent.

Microsoft introduces bigger tiles for some apps like People Hub and Cortana. Tiles can be expanded four times compared with a regular mid-size tile. In addition, a Tile can expand vertically and horizontally – new Wide & Tall sizes.

Users can reply to messages when toasts pop up at the top by typing or dictating (microphone icon). Alarms can be dismissed and photos can be opened directly from the toast. Third party apps like Facebook is not supporting the new functionality at the moment.

There is a new virtual pointing stick for moving the cursor within texts. This feature works only with a subset of apps, but more will be supported in future builds. Another improvement is ‘Voice Input’ so users can dictate after tapping on the microphone icon at the top of the keyboard.

Photos and Calculator apps have been reworked as universal apps so they are in fact identical to the current version for PCs. Calculator now includes an option to switch between standard, scientific and programmer mode. Build-in convertor has been added so you don’t need to install a third-party app to convert. Many categories have been included – like weight, distance, volume, temperature, energy, speed, and more.

Photos app aggregates all photos from OneDrive and the phone. The app is identical to that on Windows 10 for PC. Another new app is called File Explorer. It replaces the old Files app available for Windows Phone 8.1

All new apps come with a Hamburger menu at the top left corner giving access to app options and settings.

Microsoft has finally organized everything into categories, just like the PC version. Some of the sub-menu pages have an annoying white background while the old settings from Windows Phone 8.1 are kept untouched by Redmond and are still painted in black.

The first Technical Preview for Phones comes with many bugs, so it is not recommended to replace the official Windows Phone 8.1 version with Windows 10 on a primary device. 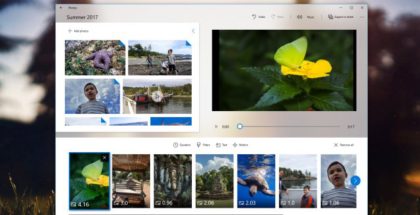