HTC USA sells all devices for 20% off

The Taiwanese company has announced a 20% price cut for all devices through January 2 so you have a chance to get a contract free version of the HTC One M8 for Windows for $520 (down from $650). You can choose between three US carriers (Verizon, T-Mobile, AT&T) which means the phone is locked to their networks even though being sold contract-free.

Each customer can order one smartphone using the discount code HTCHOLIDAY20 during the checkout. The campaign ends at 9 PM PST on 1/2/15.

HTC One M8 is probably the best Windows Phone you can buy right now (except the camera) but is available only in the US market. The device comes with a 5-inch Full HD screen, Snapdragon 801 processor with 2GB of RAM, 4MP UltraPixel camera and Boom Sound speakers.

HTC is rumored to be working on a successor to the One M8 dubbed HTC Hima. Latest leaks revealed there could be a Windows Phone version of the phone expected to be announced in March/April 2015. 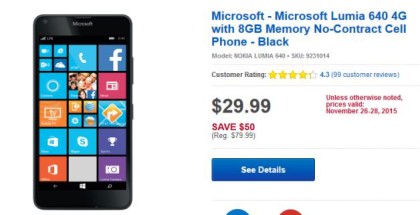