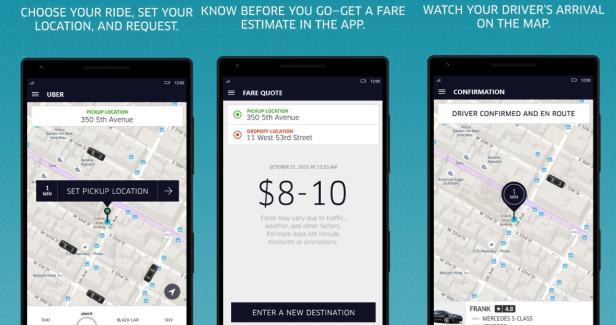 Uber has released a redesigned universal Windows 10 app that is available for Windows 10 PCs, tablets and phones. The app allows you to request a taxi on your Windows 10 device – even with your voice thanks to the Cortana support within the app.

In addition to the layout changes, the new app supports Continuum so you can connect your Lumia 950 or 950 XL to a monitor and the app will scale up to the bigger screen – you can use it with a mouse and keyboard, just like on a PC. The universal Windows app also supports Live Tiles – you will see estimated time of arrival on the Start Screen.

Uber is a popular service that allows you to request a ride by setting the pickup location on a map and stay connected with your driver while waiting the taxi. You can compare rates, add a credit card, and receive a receipt for your order on the email.

Download UBER for Windows 10 and Windows Phone 8.1 from the Store.