Microsoft has released a small configuration update to all mobile Insiders on the Fast Ring. The update doesn’t include new features and changes, but only prepares the Insider devices for future builds. Microsoft’s Gabriel Aul writes:

“Today we are rolling out a Configuration Update to the Windows 10 Mobile Insider devices in the Fast ring. This update prepares devices to receive the next cumulative updates, as well as improvements to the client-side update experience. There are no noticeable changes immediately after installing this Configuration Update.”

The software giant is expected to start releasing new ‘Redstone’ preview builds for mobile phones in February, but these initial builds will be only available for phones with official Windows 10 Mobile update.

At the same time, Microsoft should start rolling out the Windows 10 update to the older Lumias and eventually add these devices to the list with models supporting the new development branch – the so-called Redstone update. 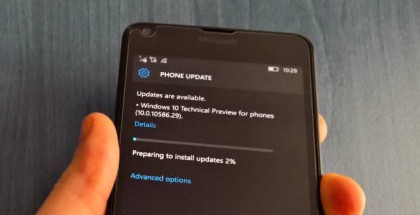