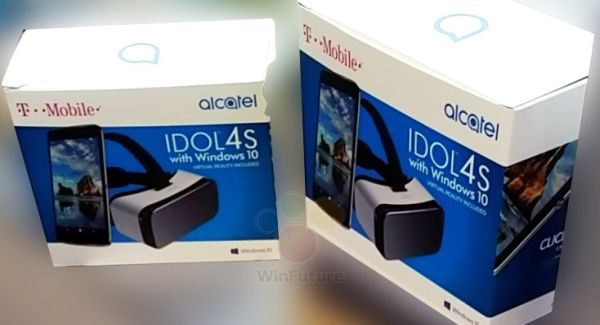 The Idol 4S will debut in the US for T-Mobile

T-Mobile will be the first carrier in the world to offer Alcatel’s Idol 4S with Windows 10 Mobile. The phone, whose name was supposed to be Idol 4 Pro, will indeed be sold as ‘Idol 4S‘ by T-Mobile, according to the new leak. The retail packaging for the Idol 4S with Windows 10 also confirms that the phone will be packaged with a Virtual Reality headset.

Alcatel Idol 4 Pro will indeed be marketed by T-Mobile US as Alcatel Idol 4S with Windows 10. VR headset included. Here's the packaging. pic.twitter.com/UlFsAJMrbV

Last month, several VR apps were discovered in the Windows Store, but there is no information yet on what kind of content the users will be able to enjoy on Windows 10 Mobile.

The specs of the Idol 4S (Idol 4 Pro) are also unclear. There is an Android version of the 4S launched months ago, packing a mid-range Snapdragon 652 processor and 3 GB of RAM. However, earlier leaks have pointed towards high-end specs for the Windows 10 phone, including a capable Snapdragon 820 chipset and 4 GB of RAM.

T-Mobile and Alcatel are likely to announce the new smartphone soon, so stay tuned.