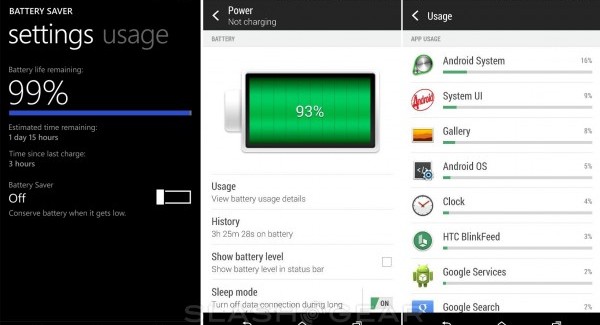 The first smartphone ever to ship with two different operating systems is the HTC One M8, enabling us to make the first direct comparison between Windows and Android running on the same hardware and draw important conclusions about OS speed, battery efficiency, overall performance, camera speed, and more.

We do know that Windows Phone requires less power to operate, but a direct comparison has not been possible… until now. First, let’s have a look at the official specifications of both One M8 versions. (Remember they have identical hardware and the battery is 2600 mAh). According to HTC’s website, HTC One M8 for Windows should last up to 21 hours of active use, while the Android version lasts no more than 12 hours, or Windows lasts almost twice as long as Android! Standby time is another key indicator of battery efficiency, and here the difference is not so dramatic, though still significant – 15.5 days vs 12.2 days.

Now let’s see the first real tests. Slashgear has begun testing the HTC One (M8) running two OS. The phones have been charged to full capacity, then unplugged, and left doing nothing.

[We will update you as new results become available.]