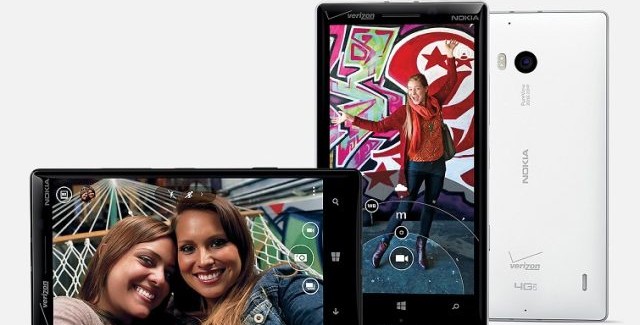 Pros: superb audio, great screen and fast processor Cons: not so sleek, only for Verizon

Nokia Lumia Icon, the first Lumia without numbers after its name represents Nokia’s effort to bring a high-quality Windows Phone to the largest carrier in the USA – Verizon Wireless. The phone offers pretty much everything we’ve found on the Lumia 1520 including top hardware and excellent camera, but the Icon features a more compact body shape with smaller proportions.

Unlike companies like Samsung, Nokia always tries to separate one model from another by its design and beauty, not just by its innards and specs. We have seen different design decisions – from the solid Lumia 900/920, through the bit odd-looking camera phone Lumia 1020, to the massive 6-inch Lumia 1520 phablet, they were all unique models. Now we have a device called Icon, so the stakes are definitely higher and all three companies involved (Microsoft, Nokia and Verizon) need desperately the Icon to be iconic.

Nokia Lumia Icon is made of high-quality matte polycarbonate in black or white with an elegant aluminum strip around the sides, so the phone looks and feels quite premium in our opinion. The Icon has a rectangular shape with less rounded edges compared with other Lumias. Nokia has included a large 2420 mAh battery, so the device is quite thick with its 9.9mm. 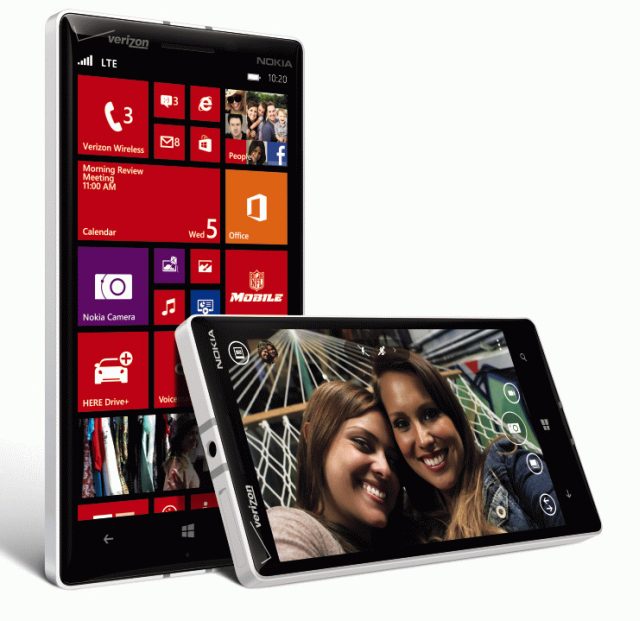 On the back side you will see an external speaker grill next to two Verizon logos and two holes for microphones (and two up front). Three buttons are found on the right side (volume, power, shutter), the USB port sits at the bottom edge, while the nano SIM slot is positioned on the top left corner just next to the 3.5mm audio jack.

Fronted by a beautiful 5-inch AMOLED screen with a 1920 x 1080p resolution, Gorilla Glass 3 and Clear Black, the Icon produces vibrant and well-saturated colors, just perfect for the Windows Phone interface. If you feel that the saturation is not accurate, you can adjust it through the settings menu. In addition, the display offers some of the best viewing angles and blacks seen in a smartphone, so you can easily read in direct sunlight. As the screen is large enough, Nokia has enabled an additional third column on the start screen, allowing users to place more tiles, like the 6-inch Lumia 1520.

As far as screen durability, the Icon features Gorilla Glass 3 protection, which combined with slightly curved glass edges makes the display as scratch-resistant as possible.

The Icon has a 20MP camera with a 1/2.5 sensor and an f/2.4 lens, the same as the Lumia 1520. With such characteristics you should expect excellent pictures, very close to the Lumia 1020.  The truth is that the Icon delivers great pictures in most cases, especially in low-light conditions. Due to the optical image stabilization, the phone takes very stable and sharp shots, which most of the high-end phones cannot. In terms of quality, the Nokia’s output is very close to the Xperia Z1 or iPhone 5S, but sometimes the images are mutter and not saturated enough, depending on the conditions. Nokia Lumia Icon captures two different sizes of every single shot – a 20 MP for post-editing and a 5-megapixel oversampled image for quick sharing. 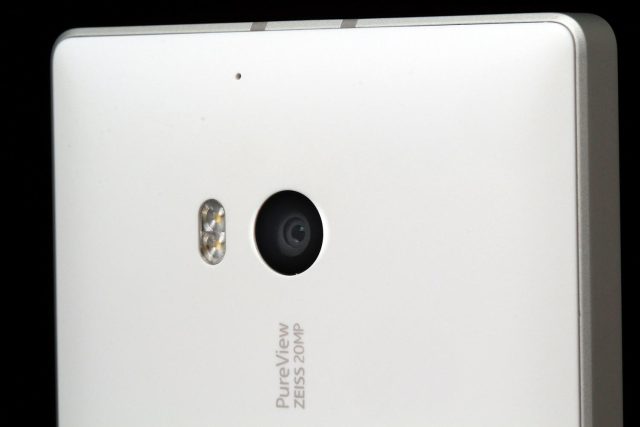 Nokia Lumia Icon also comes with many exclusive pre-loaded apps such as Nokia Refocus and Nokia Creative Studio allowing you to improve, re-frame, or apply some nice effects to the pictures. Compared with the 41MP camera in Lumia 1020, the Icon has a slower autofocus on close-ups and dual-LED flash instead of Xenon. So, the Lumia Icon doesn’t set a new standard for mobile photography, though it is still an excellent camera (samples from Nokia Lumia Icon here)

The camera captures 1080p videos at 30 frames per seconds with a good level of details, but it has a bit too active autofocus. Sometimes videos look a little too choppy when you capture fast-moving objects, while in low-light conditions the camera can struggle to stay in focus. On the other hand, the Icon picks up unbelievable audios, as the phone is equipped with four independent high-quality microphones (two on each side) for directional audio recording (watch the video below).

With a light and well-optimized Windows Phone platform, Nokia Lumia Icon runs smoothly and all apps resume almost instantaneously. After the WP8.1 update expected in Q2, the Icon’s performance should improve further, while users will have new customization options, a digital assistant Cortana and many other improvements and features.

As the quad-core Snapdragon 800 processor running at 2.2 GHz is one of the best in its class, resource-consuming games and apps run smoothly, while saving and rendering images takes less time than the Lumia 1020 which is built around a dual-core processor. The Icon is fueled by a 2420 mAh battery good enough for at least one day with normal use. Call quality was found above the average, while internal and speakerphone volume was loud enough to hear comfortably.

The app selection in the Windows Phone store has been improved a lot and users have an access to some great Nokia and Microsoft services. In addition, most of the popular third-party apps on Android and iOS are already available in some form for Windows, so Microsoft’s ecosystem appears to be more competitive than ever, though there is still work to do.

Nokia Lumia Icon is the best Windows Phone at the time of writing. With specs similar to the 6-inch Lumia 1520, the Icon has to be more appealing to the masses, as it has a more compact body. The phone offers a great photographic experience and rich audios, an excellent 441ppi display with Clear Black and Gorilla Glass3, modern and fast processor.

The Icon may not be the sleekest smartphone, but it is still a good option for all Verizon customers who support Windows Phone and want a device with top hardware. Unfortunately, this model is available on one carrier in the world, but this may change soon as Nokia is expected to announce its next wave of handsets in Q2.