A week ago we shared the news on Lumia 520/525’s successor codenamed Nokia Rock. The phone that is expected to be called Lumia 530 is currently under development, according to @evleaks.

The same source yesterday announced that the Lumia 530 will arrive at T-Mobile in the US, though no specs and availability details were disclosed. The T-Mobile’s version of the low-budget device is codenamed Nokia Rise and it’s likely to fall in the same price range as its predecessors (Lumia 520 and 525). Microsoft however, could surprise us offering the smartphone at an even lower price.

At the moment we don’t have an official confirmation about Lumia 530’s (Rock or Rise) existence, though a device codenamed Nokia RM-1027 recently appeared on the GFX benchmark making many people believe it is indeed the Nokia Lumia 530.

The phone is described as having an 800 x 480p screen, Adreno 305 graphics – so typical for low-end devices, 5MP camera, on-screen buttons, dual-core processor and Windows Phone 8.1 out of the box. We hope that more details will emerge in the coming days. Meanwhile you can order the Lumia 630 & Lumia 930 – the first new models for 2014 running the latest OS build. Lumia 630 is an affordable model with a 4.5-inch screen and a quad-core processor, while the Lumia 930 is a top-end Windows Phone fronted by a 5-inch screen, with a 20MP PureView camera on the back. 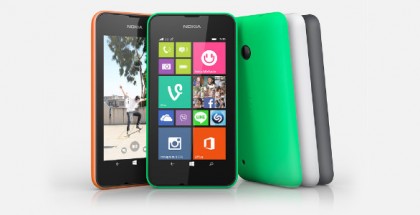