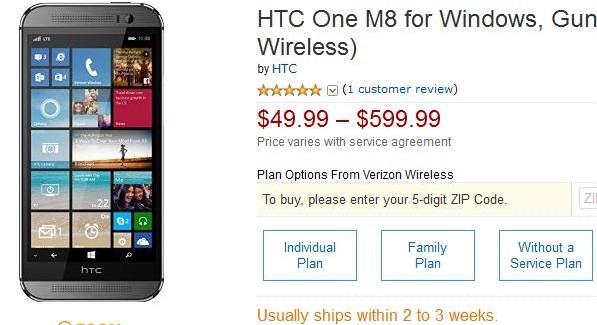 HTC One M8 for Windows was announced just a week ago as a Verizon exclusive with a price of $99 on contract. Now the phone pops up on Amazon’s website so you can order it for just $49 or the upfront cost has been reduced by 50%.

Again this is a Verizon-tied device so you need to sign a new 2-year contract. If you place your order online your unit will be shipping within 3 weeks, as per the listing. You can choose between several individual price plans or get the One M8 without a plan for $599.

HTC One M8 for Windows is the first smartphone on the market running Windows Phone 8.1 Update 1 offering new improvements and features including support for interactive case covers (HTC’s Dot View).

HTC Sense TV, BlinkFeed, HTC Camera, Cortana, U focus, and more software features come pre-installed on the phone. The specs are well-known – 5-inch Full HD display, 4MP camera, 2.3 GHz quad-core Snapdragon , 2 GB of RAM, 32 GB of storage, microSD, LTE, 2600 maH battery. You can pre-order your HTC One M8 from Amazon and expect a delivery within 3 weeks, or head to the nearest Verizon store to get the phone right now. More US carriers including Sprint and AT&T will be carrying the smartphone later this year.