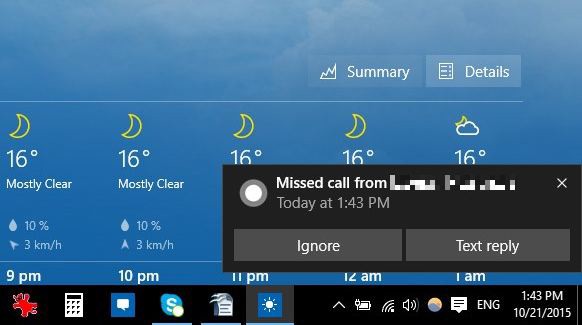 Cortana notifies about missed calls and sends texts to phones

With mobile build 10572 or higher, Microsoft adds handy new features to Windows 10 – missed call notifications on PC and the ability to use Cortana on PC for sending texts from the phone.

In order to use these features you need to:

When you miss a phone call you will see a pop-up notification on the PC. You can reply with text or ignore the notification.

The notifications are received on all your connected PCs, but you can turn the feature off to any PC by going to Cortana Notebook → Settings → Missed call notifications.

You can also use Cortana to send texts from the PC by speaking or typing ‘Text’ followed by the name of the person.